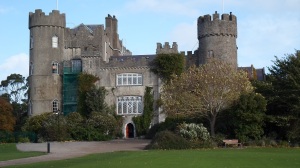 November surprised with her glorious blue sky this morning. All the better, because I had actually managed to rouse myself for the Malahide Parkrun, and, perhaps, a personal best for this 5 km romp.

There were quite a few Airtricity T-shirts among the assembled runners. Ah! marathoners from last week`s Dublin City Marathon… Good to see them there, recovered after their superhuman exertions.

And, as with all parkruns, it was a nice mixed bag after that. Little kids, granddads and every other age group in between.

And then there was me. wondering if a lie-in wouldn`t have been a better idea after all.

But, heernnnnk! with that eerie sound, the run was suddenly underway, I hit Start on my runkeeper app and followed the crowd. Oh boy, they were fast. It wasn`t long before I was feeling distinctly unwell and Mrs Runkeeper was screaming

I think she was kinda shocked herself.

Mind you, I did attempt to pass out one of those Airtricity shirts in the early stages. One woman even showed all the signs of belonging to my age category too. (Yeah, I know, it`s alarming.) but I didn`t get within a whisper of her.

Soon, all I cared  to focus on was just finishing the damn thing.

Annoyingly, as I struggled onwards, some of the field were not only passing me out, but actually fully engaged in conversations while they were at it. I heard all about the best parties in Malahide, the kind of boots that are in right now and where not to eat in Clontarf. (Luckily, I can keep a secret.)

And the most I could muster in terms of conversation at that point, would have been something on the lines of “I`m dying.”

Luckily, nobody asked, so I struggled on, and struggled to keep up.

Critically, this is nothing like my training. Apart from my very brief interval sessions, I rarely keep up any decent pace for too long, content as I am to get lost in my thoughts or the latest from RTEs doconone.

Hmmm, gotta watch those junk miles….You know the ones. Those filler miles for your weekly total that are nothing to do with improving form or speed but more about satisfying the mileage calendar.

On the plus side, I didn`t shame myself. Two years ago I would have been perfectly happy to be running sub 9 min miles. Well, I`m still in the 8 miles per min zone. Just about.

No PB today, but it was close and well, there`s always another day.

Next week marks Malahide Parkrun`s First Birthday! Whey! hey! Avoca happens to be the restaurant on the courtyard and they`re supplying teas, coffees and a birthday cake for the event.

Next week also marks the start of a new year when each runner can start to compile points for the yeat`s running league. A new year in the middle of this most miserable of months sounds good to me.

And, if you have the slightest inclination to run, parkrun is a great place to start. It`s free, it`s just five kilometres , it pushes you to improve and yet celebrates that running is for everyone. See what runs are available to you globally, print off your own personal barcode and get stuck in.

And if you turn up at Malahide next week, watch out for me. I`ll be the slightly out-of-breath but nonetheless, stunning looking runner who will have just passed you out….

I love reading, and responding to, your comments. Thank you. Cancel reply