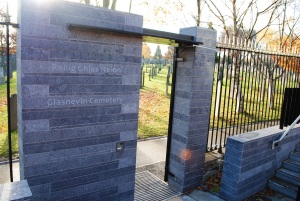 Our National Botanic Gardens, in Dublin, and Glasnevin Cemetery are neighbours along the city`s northside. Both have seen massive investment from the Office of Public Works since the 1990s. Though, of course, they express different aspects of our heritage, they are each in different ways, oasis in the city:one is an escape through nature and colour, the other an escape through time into our nation`s past.

Although they shared wall, the visiting public could not access one centre from the other. All that changed this year with the addition of a new gateway, linking both places.

I accessed the cemetery from the National Botanic Gardens side. Much though the low winter sun suited my enjoyment of the winter gardens, it was also imminently suited to the atmosphere of the cemetery. The low light created long shadows on the serried rows of headstones, while the winter chill and quiet added to the sombre tone of the place. 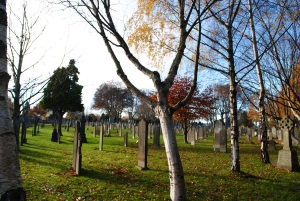 But Glasnevin is a place of exhultation too. 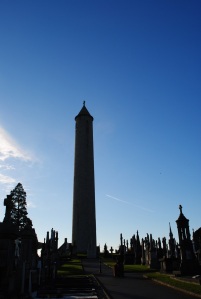 Look at the Round Tower, for instance. Fashioned on the old architecture of the monastery towers, it was built in memory of one of Ireland`s great heroes, Daniel O`Connell. O`Connell witnessed the bloodshed of the French Revolution in 1798 and it turned him off violence for life. He determined to find peaceful ways of negotiating through the turmoil Anglo Irish politics in his time and, in doing so, also inspired other pacifists, such as Mahatma Gandhi.

As part of his work towards Catholic Emancipation in 19th century Ireland, O`Connell was instrumental in setting up Glasnevin Cemetery. Before the Cemetery was established, Irish Catholics were only allowed bury their dead in Protestant graveyards and without the benefit of Catholic funeral rites. O`Connell changed all that with the establishment of this non-denominational cemetery.

It is fitting that O`Connell`s monument looms large over very many other fallen heroes now interred in Glasnevin. 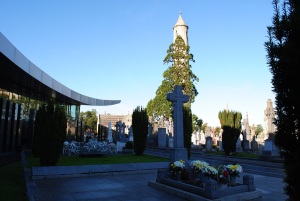 The Grave Of Michael Collins

Michael Collins was an ardent nationalist who led thousands of Irish through a bloody campaign to end English rule in Ireland. He was-and still remains-a hero to very many Irish people. He did not find favour with others, however. Particularly after he helped negotiate the Treaty of 1922 between Ireland and England. He was castigated by many, including the then President of Ireland, Éamon de Valera, for accepting the terms of the Treaty. This led to a massive split in this country between pro and anti-Treaty fans. And, to this day there are very many people in Ireland who have grown up favouring either the De Valera or Collins side.

Collins also exuded a certain charisma which added to his popularity. He was shot dead in an ambush in County Cork in 1922. His body lay in state for three days before a massive funeral party proceeded out to Glasnevin cemetery. His graveside is the most visited graveside in the cemetery. 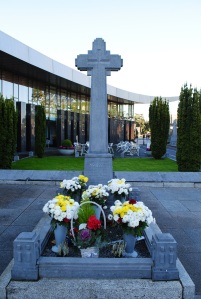 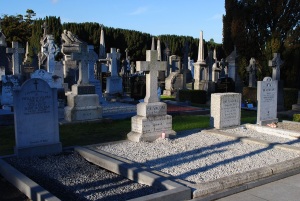 Éamon de Valera loomed large, both metaphorically and physically, over Ireland from the 1917 to 1973. And yet, his gravestone is exceedingly modest. Though frequently at loggerheads with Michael Collins during his lifetime, he lies in death, within spitting distance of his one time opponent. 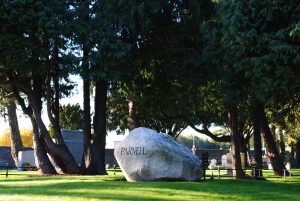 Isn`t that gravestone wonderful? It belongs to another hero of mine, Charles Stewart Parnell. That pitches me firmly back in the 1880s-1890s era. I like Parnell for his courage and compassion for leading the peasant Irish through to a better chance of establishing the right to manage their own affairs. He could have retreated into his Wicklow mining and farming interests and enjoyed a pleasant and relatively prosperous life. But instead, he took up the cause of the poor and oppressed in Ireland.

He also took up with the separated wife of a fellow MP, Captain O`Shea. That didn`t bother O`Shea until he realised he would stand to lose out on his wife`s aunt`s inheritance. After the aunt died, O`Shea filed for divorce and, in the process outed the Parnell and Mrs O`Shea`s affair. This led to public castigation of Parnell and eventually, his political downfall. After fathering three children with Katherine O`Shea, they married in 1891. But, with his health under considerable strain, Parnell died in his wife`s arms just a few short months later, aged 45.

He was mourned deeply by the people of Ireland as the 200,000 funeral throng to Glasnevin Cemetery attested.

There are other heroes too. Heroes to some people, at any rate. In fact the whole place teemed with famous names from history. 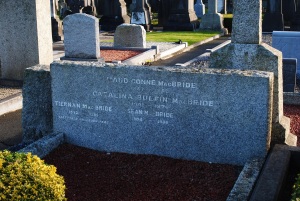 The muse of our popular poet William Butler Yeats is interred here, with her equally famous son, and founder of Amnesty International, Seán MacBride. 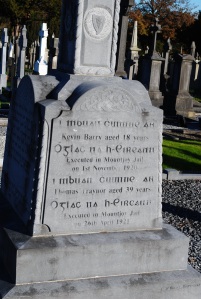 Anyone growing up in Ireland in the seventies remembers

“In Mountjoy Jail one Sunday morning, High upon the gallows tree, Kevin Barry gave his young life, In the cause of liberty”

A nationalist from a previous generation is buried here: 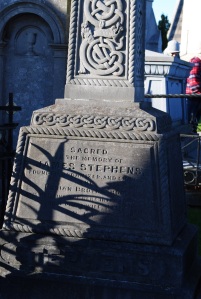 James Stephens founded the Irish Republican Brotherhood in the 1850s. 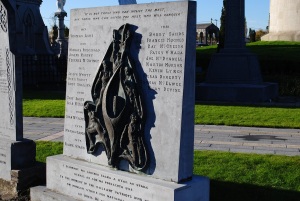 More heroes from the history books… 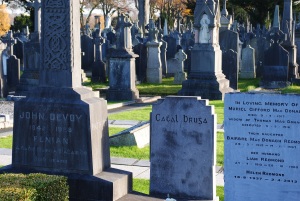 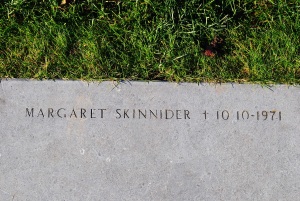 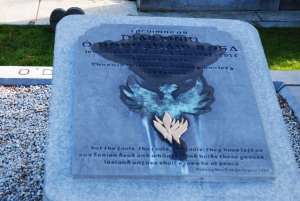 O`Donovan Rossa of whom Padraig Pearse spoke so eloquently… 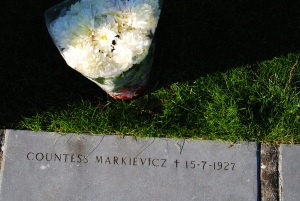 ,
Formerly Constance Gore-Booth of Sligo, later Constance Markievicz, a strong and rare female presence in the early years of the Irish Republic.

There are many, many more. In fact you`ll be tripping over heroes in Glasnevin.

And I`ll finish in the shadow of the giant again, Daniel O`Connell.

Glasnevin is full of the working people of Dublin. James Larkin upheld these people by forming trade unions improve their lot. I`ll finish with the man who was a hero to those people, a man who left his mark on Dublin as he leaves his shadow on the graves of the working classes in Glasnevin.

So, in the shadow of two great heroes in history, Daniel O`Connell and James Larkin, we bid farewell to Glasnevin Cemetery. 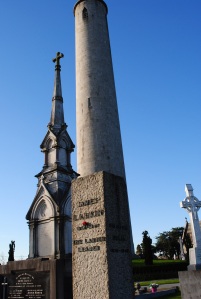 Terrific clip of the Michael Collins` funeral procession to Glasnevin

I love reading, and responding to, your comments. Thank you. Cancel reply