Hmmm, now…will I have the gel or Snickers?

Oh, that will be the endotrophins kicking in.

Ah, sure this marathon lark is a breeze, Mary, isn’t it?

Why did I think a vest would be a good idea?

Thumb up to you too!

Victory? Just another twenty one miles away, I’m afraid.

You know what we should do after this Louise? We should sit down and have a good natter.

Well, it looks like the marathon photo session is at an end. I’ve added new pics today in my Dublin City Marathon 2014 page.

If you scroll on down through that page you will find some of those runners I snapped from the 3:20 pacers right through to the 5:00 hour pacers just before Mile 5 on Chesterfield Avenue in the Phoenix Park.

There are two more posts concerning this year’s marathon with my kerbside highly uninformed commentary here and another post regarding the marathon photographs here.

The photo gallery on this post is a selection of my favourites from the latter section of the marathon. While everything is terribly serious for the sub-three hour crew, from a kerb-side perspective, the marathon gets to be even more fun as it rolls along.

Back to the land of the running now.

Or it would be if I didn’t fall on Sunday. Darn. More anon!

Another day, another marathon. But, no, not of the running kind.

I spent the morning wading through the mountain-there’s over a thousand-of pics I took at yesterday’s Dublin City Marathon.

Naturally, having run a marathon once before, I am made of tough stuff. But, by the time I got pic number 100 uploaded onto my new Dublin City Marathon page, I was in need of a stack of gels. Although a fine red wine would have helped either.

Today’s additions just takes you past the 3:10 pacer mark. All of the pics have been taken before the five mile point along Chesterfield Avenue, so all you runners look nice and fresh faced.

I’ll be adding more runners in the coming days, right along through to my people in the Third Wave.

Well done to one and all! Hope you’re not in too much pain today!

Chesterfield Avenue, Phoenix Park, Dublin waits to greet over four thousand athletes. Five miles away, at 8.50 am in Dublin city centre, the marathon had begun.

Home of our President: Áras an Uachtaráin

President Michael D. Higgins only had to step outside his front door to catch all the action. Meanwhile, I hung around the Phoenix monument. Maybe I’d catch sight of Michael D. or a man in a skirt, or a barefoot runner even.

There was a great buzz about the place. Buoyed up by the steady beat of music from a local pop station and armed with clappers and balloons, the crowd clustered about the monument, and  formed little knots along the footpath. Soon,  sirens sounded, and a great cheer arose at the sight of the first athlete pushing his way along the avenue.

Anyone give me a name for this athlete please?

Wonderful to watch, the wheelchair athletes must have serious arm  and upper body strength.

He was followed, some ten minutes later, by the lead runner, Dmitry Safronov.

First man at the Phoenix monument

…while two clusters of leading men hung back, no doubt as part of their race strategy.

Pavel Teplykh is leading this group along, followed by Ethiopian Fikru Teshager.

Who is this guy? I can’t see him on the results sheet.

And here’s… well, actually, I don’t know. There’s no sign of number 17 on the results page this evening. Help, anyone!

The lead lady couldn’t be far behind now, could she?

Yes, here she is~Maria McCambridge. Maria was intent on keeping her marathon first from last year and, while that didn’t quite run out, she ran a mighty race, gaining a personal best and a finishing an agonizing four seconds behind the winning lady.

This lady was faring very well at this point too. She’s Gemma Rankin from Scotland.

And here’s a girl who was well able to keep up with the guys too.

While further along the line, this lady from Raheny Shamrocks looked very comfortable, making it all seem just like a nice little jaunt.

There’s David Carrie in white and blue shirt leading Team Carrie along and already looking set to earn another yet sub-3 hour marathon.

The three hour pacers brought a huge crowd with them.

The cool shades and gloves worked well for this guy as he was making terrific progress at this point and completed the marathon in three hours four minutes and fourteen seconds.

There are pacers at every ten minutes at the DCM

While l`homme français was keeping up with the 3.10 pacers to the cries of “Allez!” from the crowd.

Conditions for running might have been a tad warm, if anything. A gentle south-westerly had brought temperatures up to the mid-teens and I marvelled at how oblivious some runners seemed to be to such heat.

Take this guy, for instance…

Of course, he couldn’t possibly have been as warm as…

FLASH! A-ah….Saviour of the universe…

Another guy with a great sense of humour.

Though I am not sure if charity was the cause here. Perhaps he was being patriotic?

I hope he has running shorts under that kilt…

Oh, and check out the barefoot look! I wonder how he fared by mile 26?

We’re only at mile five remember, and already the heat was getting to some folk.

And I wondered if this kid really stuck the pace? Three hours seems too long to be pushed around in a buggy.

Mammy, Mammy, I want to get out!

It was striking how serious and focused everyone was in the first and second wave of runners.

They were so intent that they barely noticed the crazy lady photographer snapping at their feet. But as time wore on and the ordinary runners came along, there was a greater variation of expression. Some were there purely for a fun day out. For others, it had been a challenge to get to this point, and a challenge to work their way through it. These are my people, the Third Wavers.

Some took the waving literally.

Hi! to you too, Francis!

Other just laughed their way along

Or clowned their way through the twenty six miles. Don’t you just love that outfit, though?

Oh, only twenty one miles to go in this get up.

While others were happy to say…

Considering that the winners would streak through the distance in a little over two hours, the less athletic possibly suffered more as they were a lot longer on their feet and not quite as streamlined.

In four hours time it will all be over.

Hey Well done you too!

It’s a challenge for everyone and for lots of different reasons.  All of them deserve a great round of applause.

Disclaimer: Obviously I am not a race reporter so if you want to give me feedback on any aspect of this report please get in touch or comment below. I have some pics from last year’s Dublin Marathon here and will add more from this year’s photoshoot in the next day or two. 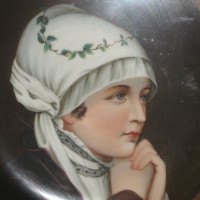 Live-Blogging Love Lost and Found, from Blue Angels in the Backyard to Penguins on the Equator